A forced-choice scale question (also known as an ipsative) is a rating system that does not allow for an Undecided, Neutral, Doesn't know, or No opinion response, so in other words allows you to collect more actionable data.

A forced-choice question is designed to force respondents to express an opinion or attitude. This question type forces the respondent to choose between two or more desirable options and pick the one that is most preferred and clearly indicates a definitive opinion.

Forced choice survey questions are usually written in the form of an agree/disagree statement or consist of statements where respondents select the one closest to their true feelings.

Survey research studies generally indicate that excluding Don’t Know and Neutral options don't necessarily change the proportion of responses leaning toward certain sides of a Likert response rating. So these questions can add value, especially when you want to make business decisions based on customer preferences.

A 6-point rating system with three positive and three negative options, but without a neutral option is a classic example of a forced-choice rating question. 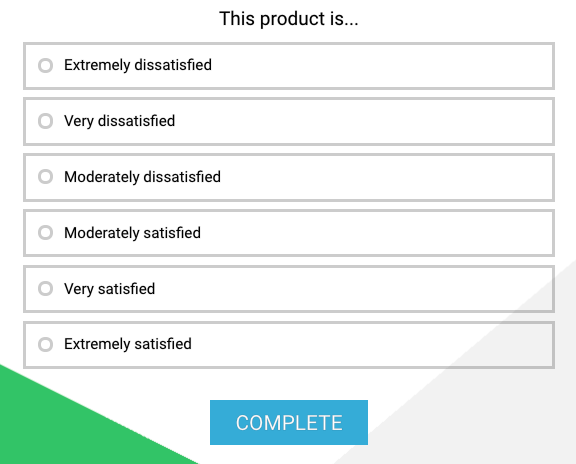 Take the two suggestions below into account, if you’re considering forced-choice questions:

Keep in mind that your goal is to force customers to make a choice,  but not at the risk of losing valid, reliable survey data.